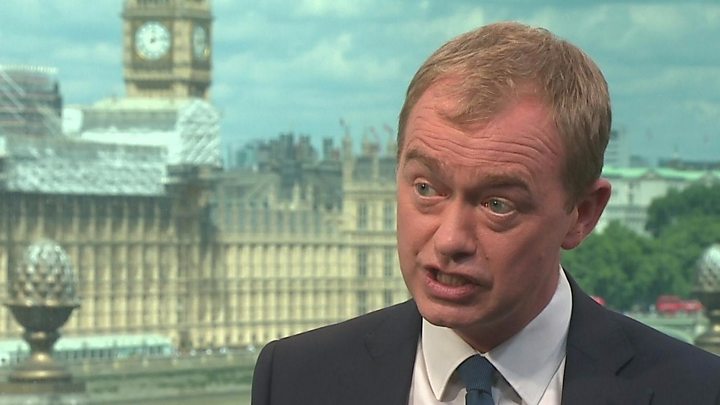 With Brexit-vision, intolerance seems to have become the ‘new normal’. Take, for example, the so-called “interview” of Liberal Democrat leader Tim Farron this evening by Andrew Neil. You can read the full transcript on the Spectator blog (remembering that Andrew Neil is the chairman of the Spectator, among other things).

There was a time when interviewers used to ask questions and listened to the reply before following it up. If the reply was drifting away from the question, of course, the interviewer should intervene. Maybe Newnight’s Jeremy Paxman was the first to develop this more aggressive TV interviewing style. Even so, if the interviewer does more talking than the interviewee, maybe it ceases to be an interview?

It seems that Brexit-vision has led to the phenomenon that Tagore described in his speech Nationalism in the West: “the idea of the Nation is one of the most powerful anaesthetics that man has invented. Under the influence of its fumes the whole people can carry out its systematic programme of the most virulent self-seeking without being in the least aware of its moral perversion, – in fact feeling dangerously resentful if it is pointed out.”

Meanwhile, after hiding behind her settee last night, Theresa May emerged to present her Brexit-vision, as did Jeremy Corbyn. Considering that neither of them have a plan for Brexit or indeed any vision which acknowledges the real impact of Brexit, their ability to waffle as if life for British people will continue as normal is impressive. The BBC perceived a “clash” but the difference between their policies is fairly marginal, especially since both are playing to the now fashionably intolerant Brexiteer voters. The “clash” was rather that they just hurl personal abuse at each other – in the truly constructive tradition of Labour and Conservative politicians.

Oh shit. The Torygraph turns on Theresa May for her persistent & total refusal to answer questions. pic.twitter.com/Rgr9jvTCxv

Of course, many on social media were asking  “where’s Theresa” yesterday evening. After Tim Farron picked up on this during yesterday evening’s debate, he asked the audience “Where do you think Theresa May is? She might be outside your house sizing it up to pay for your social care.” Labour student Christopher Knott and his friend Christian Calgie, a Conservative supporter, decided to check that she wasn’t on their doorstep.

.@christiancalgie looking out the window to see if Theresa’s sizing up the house. #BBCdebate pic.twitter.com/2LUQMzk93Z

@theresa_may They respect you more when you show strength. Or show up. pic.twitter.com/mNXXDKL0xd

Of course, the US House of Cards has been struggling lately to present its viewers with something even more scary than the actions of the real US President.

You must be nuts! – the prequel