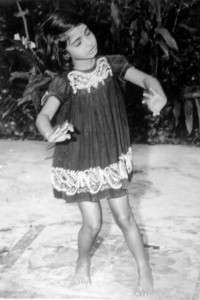 Let your life lightly dance on the edges of Time
like dew on the tip of a leaf.

When I was a child of 3, before I started to take dance lessons, my dancing was just an expression of happiness. I didn’t necessarily understand the meaning of the lyrics but I would dance to the rhythm of the music.

Gradually, as I grew older and developed my dancing skills, as well as my understanding of the lyrics, I started to express the meaning of the songs in my dancing. This was helped considerably by the compulsory dance classes at my school (Patha Bhavana, Santiniketan) from the age of 6.

There are some forms of art which can stand alone, without containing any expression. These include designs (alpona), musical scales (taan) and dance steps (such as adavus in Bharatanatyam).

Apart from being mainly a poet, Tagore was also a musician. He had learned Indian classical music since childhood. However, he never liked pure classical music without expression.

So, when setting his words to music to create songs, he didn’t apply the pure classical ragas directly but adapted them in his own way to bring out the expression of his lyrics.

Similarly, in the case of dance, Tagore preferred expressionist dance to pure dance steps. In this case, perhaps he followed the same line of thinking as Bharat Muni. Bharat Muni put more emphasis on nritya than on nritto, probably because he wanted to use nritya as a medium for drama.

In novels, poetry and plays, the author’s main role is to express his or her thinking in the form of words. This type of art typically combines art and expression to form the message of the author.

Tagore had always enjoyed drama and plays. His main objective was to find ways of expressing his poetry better. Having first used music to achieve this, he felt that the medium of dance could be used to enhance the expression of his songs. His final artistic achievement, in the last decade of his life, was to combine the three dimensions of songs, drama and dance in his dance-dramas, Chandalika (1933), Chitrangada (1936) and Shyama (1939).