My Joy Of Dance 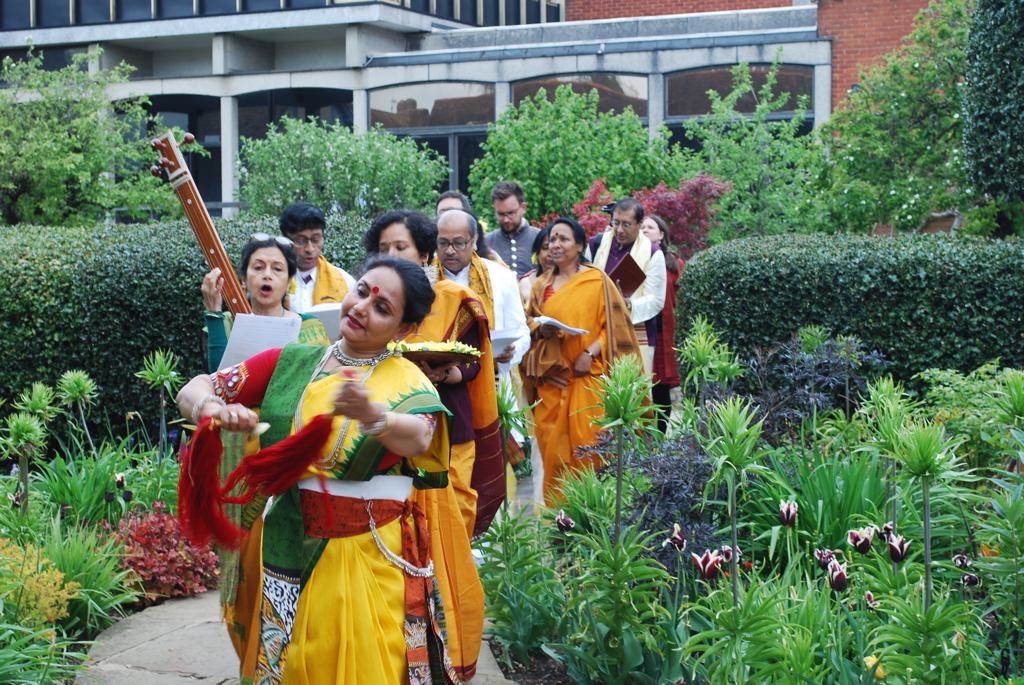 Like every year, the Shakespeare Birthplace Trust invited us (Prantik) to celebrate Rabindranath Tagore’s birth anniversary in the garden of Shakespeare’s Birthplace in Stratford-upon-Avon, UK.

Actually, I was not able to dance for a long time (for at least four years)! First, I had tendonitis in both my arms. I also managed to hurt my back and tailbone. Finally, I ended up with cervical spondylosis. So, in practice, it was very hard for me to move around and sit for long, let alone dance.

I am very grateful to my Ayurveda Doctor in Kolkata, as well as my physiotherapist in Brussels. They treated me and gave me a new life. Besides my dance practice, the Ayurveda doctor suggested that I should swim regularly.

Swimming!! It was a completely new and different world for me. Still, to be in good shape, I started taking swimming lessons last year. I really do feel good now. I even started to practice dancing again.

It is a new life for me! I have started performing dance again, after a long time.

Secondly, I thought about presenting the Spring festival as the subject of our performance. The only thing is that Spring in the UK is cooler than Spring in India! Of course, I did not forget include dance as a part of the performance – something I was not able to do for the past few years.

You might be wondering: ‘Why the Spring festival? It’s too late for the Indian calendar.’ Well, in Europe, the seasons are a bit different. Spring is only now on our doorstep or has just arrived. Cherry, magnolia, camellia, rhododendron, tulips and many other flowers are in full bloom.

So I suggested the theme, ‘Tagore and the seasons: Spring’. Obhi wrote the script for our performance based on this idea.

As you may know, Tagore wrote many seasonal songs. In particular, he wrote several songs about Spring, which is one of my favourite seasons.

I decided to dance with two songs and with one of Tagore’s poems. I started to practice on my own and, from time to time, with the musicians.

What a joy! In spite of very cold weather (12 degrees) I danced barefoot on the paving stones in the garden of the Birthplace. Some of the people from the audience asked me how I could dance barefoot, thinking I should wear a pair of socks. I replied that it can also be quite cold in Santiniketan in Winter and that this is why Tagore wanted his students to be close to nature, so that they can survive in any condition.

There is another reason why I never wear socks any more while dancing. Many years ago, I had arrived at a dance class at Sangeet Bhavan (Music Department) in Santiniketan wearing socks. The teacher, Vasunni da, (Professor TS Vasunni), looked me up and down, as if with disgust, before saying, looking at my socks: ‘Do you think this is a playground?’!

I have to say that, while I was dancing, I did not feel any pain. Only the Joy of dancing!

We performed in three parts. First, we started with a procession, singing “Orai grihobasi” , as you can see in the photo above. Then, we performed a series of seasonal songs and the poem Shesh modhu just in front of the house where William Shakespeare was born.

We concluded by moving to the bust of Rabindranath Tagore, which is under a tree in the corner of garden. Throughout our performance, I tried to introduce different elements from what I had learned from Tagore’s school in Santiniketan.

Obhi has written about the team we performed with in his blog post ‘Tagore birthday celebrations 2019‘. Without the help and commitment from all the members of the team, this performance would not have been possible. We are both very grateful to all of them.

We were honoured that the Indian High Commission was represented at our performance by Krishnendu Banerjee and by the Deputy Director of the Nehru Centre, Brij Kumar Guhare. The Indian High Commission kindly posted the tweet below with a photo of the whole team, including James Anderson, the actor from the Shakespeare Aloud! who recited the English translation of the songs and poems in our performance.

7 thoughts on “My Joy Of Dance”