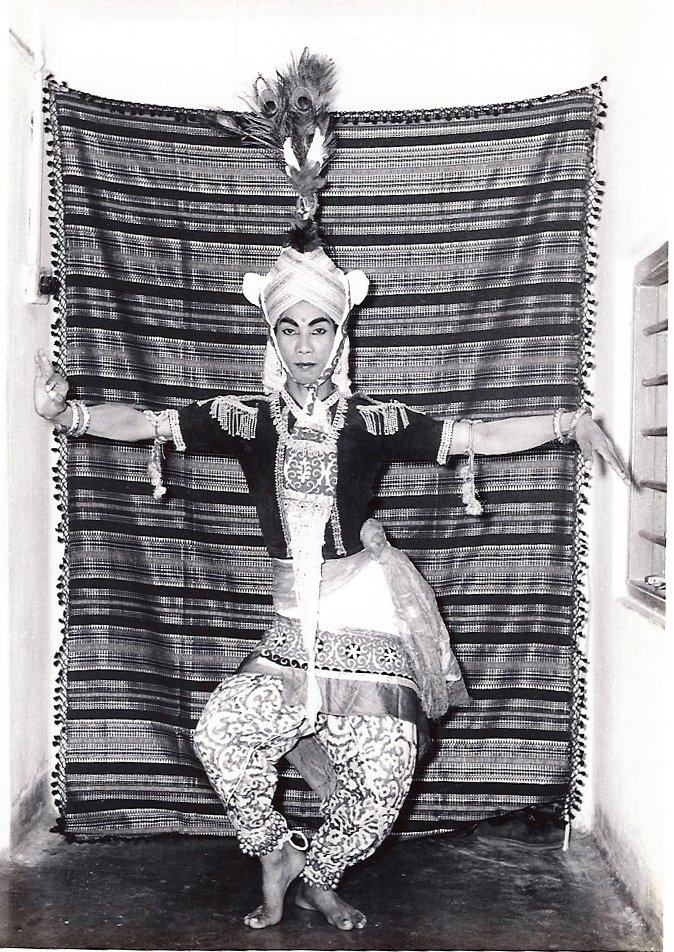 Guru Arambam Amubi Singh was widely known in Santiniketan as Masterji. It has been 25 years today since Masterji left us but he and his creative work are very much alive within his students. I am grateful to his son, Shubhroto-da, for sharing various photos and elements of his life which I mention below.

I was fortunate enough to have learned Manipuri dance and music from Masterji at Sangit Bhavana, Visva-Bharati. Masterji was born in Kangabam Laikai, Imphal, Manipur on 1 January 1930. He was the elder son of the renowned Manipuri dancer and pung (Manipuri percussion) player Guru Arambam Yaimabi Singh. His mother, Sanahanbi Debi, was a grand-daughter of Churachand Maharajah (king) of Manipur.

Masterji started to learn Manipuri dance and pung in his early childhood, under his father’s guidance at home. However, Masterji only started dancing full-time twenty years later.

Masterji learned Manipuri dance, music, kortal cholom (cymbals), pung cholom and sitar from different gurus. He received training in Manipuri dance from Guru M. Amubi Singh and Guru A. Atomba Singh, who were both later honoured with the academic award “Padmashree” by the President of India.

After completing his training in dance and pung playing, he worked in the Nritya Ashram and in the Aryan Theatre, Imphal. As he had an excellent voice, Masterji used to sing for the Aryan Theatre. He was also a dance and music director there.

Together with his father Guru Arambam Yaimabi Singh and artists from Nritya Ashram, he danced in the first ever stage performance of Laisham Jagoi ( khamba-Thoibi) in the Aryan Theatre.

He joined the Manipuri Dance College during the period of the first President of India, Rajendra Prasad (1950-1962). During this period, Masterji performed on Republic Day in Delhi. Afterwards, he performed extensively in Delhi, Lucknow, Kanpur, Mumbai and many other places in India on different occasions.

Masterji won many awards for his dance performances, direction and choreography.

“Son of the well known Guru, late Yaimabi Singh, Amubi continues the tradition of propagating Manipuri Dance with an accent on the Laiharaoba style. Himself a good pung player, he has appeared in many performances in Manipur and outside.Associating himself with many dance competitions, mostly for stage performances, he has proved to be a capable director and choreographer of no mean merit.”

At various times, Masterji also taught at Gauhati University, Dhana Manjari College (Imphal). In 1957, at the invitation of the Principal of Sangeet Bhavana, Visva-Bharati University, Masterji came to teach Manipuri dance in Santiniketan.

Before he arrived in Santiniketan, Manipuri dance had been taught only intermittently at Visva-Bharati after the death of Rabindranath Tagore in 1941. During the 1950s, the teachers did not stay long and, as a result, there were periods when Manipuri dance was not taught at all. In contrast, Kathakali dance teacher Sri Haridas Nair had established a strong Kathakali dance tradition at Visva-Bharati.

In 1958/59, for the Basanta Utsav (Spring Festival), there was a Kathakali dance performance and a Manipuri dance performance. Masterji brought costumes from Manipur at his own expense so that he could stage Basanta Raas with his students.

The wide acclaim for this performance allowed Masterji to re-establish the reputation of Manipuri dance at Visva-Bharati. Many students wanted to learn Manipuri dance from then on.

While Masterji was in Santiniketan, he took the initiative to learn Bengali. Students from the Vidya Bhavan helped him to learn the language. Tapan Gupta (pictured in the photo above), who went on to found The Tagoreans in the UK, was one of the students who helped him the most.

Masterji and Sri Radhagobinda Das (Principal of Ramkrishna Music College, Bolpur) learned sitar together from Sri Shusil Bhanja. They practised together and, in 1965, Masterji passed the BMus examination in sitar from Bhatkhande Sangeet Vida-pith, Lucknow, in the first division. He used to play the esraj and flute from time to time.

From 1957 to 1990, Masterji taught Manipuri dance and Tagore dance at Sangit Bhavan, Visva-Bharati. He created several Tagore dance compositions based on the Manipuri style, as well as choreographing all the Tagore dance-dramas. He also directed performances of Manipuri Raas, Laiharaoba and Naga dance.

From 1986 to 1990, I had the privilege of studying Manipuri dance from Masterji at Sangit Bhavan for my BMus. Even after he retired, I continued to learn Manipur taal and Tagore dance theory from him. He never gave private tuition at home and often kindly referred students to me for this.

He used to make us rehearse over and over again. If we started to become impatient, he would explain that he had a picture in his mind about how the performance should look and that we would need to keep rehearsing until we had achieved that vision.

He was the one who taught me to be ready to learn from others, whatever their age. He was a very humble person who preferred to stay out of the limelight.

Through our regular conversations, I became very close to his family and he treated me like a daughter. He even taught me how to make dried lemon pickle (achaar)!

His grand-daughter recently won a child National Scholarship in Manipuri dance and is continuing the family tradition.

Although it is now 25 years since he passed away, a few days after his son Shubhobroto-da took the photo below, I continue to be guided by everything he taught me. In the tradition of students passing on what they have learned from their teachers (guru parampara), I keep practising the dance compositions he taught me, as well as those which I learned from his former students K Jiten Singh (Jitenda) and Shubhra Tagore (Shubhradi).